This week, I tried a taco bake recipe that I found via Pinterest. It was pretty easy, didn't take long, and got good reviews from Boyfriend. I think the thing I liked best about this particular recipe was that it didn't have a lot of ingredients to fuss with. Sometimes, especially on a weeknight, it is just too much for me to have to deal with an overly complex recipe. The recipe was explained clearly and laid out nicely, which was very nice. Brandie, the author of the recipe, topped hers with tomato and sour cream, but we just ate ours plain and that was fine.

I wish I had taken a picture, but it was gone before I could think of it. Haha.
Posted by Erika at 3:55 PM No comments:

I think that I probably need to introduce the felines that live with me. Fun fact: all three of my cats came in a package deal with my boyfriend. I remember the first time I went over to Boyfriend's apartment. I was doing some homework on his couch and one of the cats hopped up and sat next to me and then we were all friends. I never had a cat growing up because my dad and my sister are super allergic to them, so I was never aware of the excitement that comes with being a cat owner. Oh, so much excitement.
The first cat I will introduce you to is Kittnins! 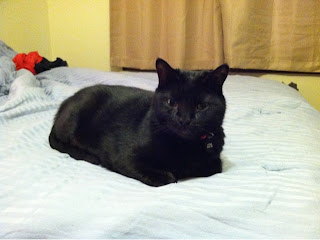 Kittnins (sometimes known to me as Kit Kat) was Boyfriend's very first pet. He was very small and sick when he came into Boyfriend's life. He was, apparently, the size of a Comcast tv remote. And he could fit in the pocket of Boyfriend's hoodie. Kittnins is the most cat-like of all of our cats. He isn't really a cuddly cat, not like our other two. He'll sit in your general vicinity, but not on your lap.
A few funny things about Kittnins:
-He doesn't meow (none of our cats really do the standard "meow"), but he makes a meeping sound.
-When he gets hungry, he follows me around and opens his mouth. I can ask him to show me his teeth and he does. It's very clever.
-He really likes ice cubes. When I fill my water bottle in the morning, I put a few cubes in the water bowl and he pokes at them with his paw.
-He owns a tiny cat-sized jersey.
-I sometimes wake up at night to find him sleeping on my pillow above my head.
-When I sit on the couch, he sits on the back of it behind my head and rubs his head on mine.
One down, two to go!
Posted by Erika at 12:27 PM No comments:

Email ThisBlogThis!Share to TwitterShare to FacebookShare to Pinterest
Labels: cats

Nearly two years ago (holy cow! two years?!), I started a book club with a few friends. There are five of us who are active in attending our monthly meetings, though not everyone can make it to every month's meeting. It's a really casual book club. We all suggest books to read and we make our decision usually by a majority vote or something. When we get together, we typically do so at a restaurant that someone suggests and we actually don't talk about the book for more than 10-15 minutes. We spend the rest of the time just catching up and enjoying each others company. It's pretty great.

I have been wanting to share the list of books that we have read so far, so I'm really excited to actually be doing it now (and I will link the books to amazon in case you feel inspired to buy one for your home library). We usually focus on classic works of literature, but sometimes something more recent makes it into the spotlight.

1. James & the Giant Peach by Roald Dahl
2. Sense & Sensibility by Jane Austen
3. A Study in Scarlet by Sir Arthur Conan Doyle
4. A Tree Grows in Brooklyn by Betty Smith
5. Twenty Thousand Leagues Under the Sea by Jules Verne
6. The Bell Jar by Sylvia Plath
7. The Scarlet Letter by Nathaniel Hawthorne
8. My Antonia by Willa Cather
9. Madame Bovary by Gustave Flaubert
10. The House of Sleep by Jonathan Coe
11. Jane Eyre by Charlotte Bronte
12. American Gods by Neil Gaiman
13. We Need to Talk About Kevin by Lionel Shriver
14. The Sun Also Rises by Ernest Hemingway
15. I've Got Your Number by Sophie Kinsella
16. The African Queen by C.S. Forester
17. The Eyre Affair by Jasper Fforde
18. The Invisible Man by H.G. Wells
19. Damned by Chuck Palahniuk

Currently, our selection is The Great Gatsby by F. Scott Fitzgerald. One of my favorites.

I need to confess that I did not like all of the books that we have chosen for book club. I was also surprised by how much I liked some that I never would have chosen for myself. It's nice to have suggestions from all of our club members so we can all try out different books that we may not have considered before. Books are awesome.
Posted by Erika at 1:05 PM No comments:

Email ThisBlogThis!Share to TwitterShare to FacebookShare to Pinterest
Labels: books

I made red velvet cupcakes yesterday. They. Were. Delicious. They still are.

I didn't make my own frosting, which is probably cheating. I used Betty Crocker cream cheese frosting and I feel like it worked out just fine. I also topped the cupcakes with little autumn sprinkles (red, green, yellow, pumpkins, etc) because, well, why not? Anyway, anyway, you need to know that I used Joy the Baker's cupcake recipe. You should try it. My red cocoa paste was not super pasty, but it all worked out.

I shared my cupcakes with Laura and Amanda last night when they came over for a girls night. We ordered pizza, watched a huge number of episodes of "Say Yes to the Dress" and generally had a fabulous time. It was nice to be able to watch something while simultaneously talking, laughing, eating and making fun of the people on the show. Haha. I'd recommend trying it.
Posted by Erika at 11:37 AM No comments:

I used a recipe that my dearest, darling mom gave me. It's a recipe for the crock pot, so it requires very little stress and worry. Here you go:

-Put veggies in cooker.
-Stir in salt and pepper.
-Add roast and water.
-Cover and cook on low for 10-12 hours.

Easy peasy!! Here's a tip from me to you: use a slow cooker liner (Reynolds makes them). It will save you a huge headache when you clean up after dinner. I promise. Now, I did make a couple of alterations to this recipe this most recent time making it. I had six of those small red potatoes, so I cut those into small chunks. As for carrots, I had some from my garden so I used a handful of those (they were small and stubby and I'm not sure how many I used). Also, I used a smaller roast than it calls for. This is just because it was only going to be for me and Boyfriend. The one I used was closer to 2.25 pounds.

Make this soon! It will be awesome and since we're coming into colder weather, a roast like this will be a perfect choice.
Posted by Erika at 11:07 AM No comments:

WAHOO!!! The Detroit Tigers are going to the World Series! What a series that was. Last night, watching game four, I couldn't even control my excitement. By the time the 9th inning rolled around, I was just running around the living room and when the game was finally over, I was leaping and screaming and clapping and scaring the cats. Oh man. OH MAN!!!!! Hopefully, this series will not be a repeat of the tragedy that was the 2006 World Series. Ay, ay, ay.

In conclusion: I. AM. EXCITED.

It has been a shamefully long time since I posted. Forgive me, please.

I was going to make a list of what has been going on lately that has been preventing me from writing, but I realize now that it wouldn't be very long and certainly not very interesting. I have just been working and coming home, mostly. Last weekend, I made friends with a dog named Boris that our friend was dog-sitting. That's exciting. This week, I came home to hairballs on my bed not once, not twice, but THREE times! Oh happy day! Maybe the cats weren't satisfied with the cleanliness of my comforter? I don't know; I was not happy.

My current sewing project is an apron for the Duck. I have to really get on that, because it shouldn't be taking me this long. Blah. After that, I want to get some pillow forms and use this one really wonderful remnant that I got at JoAnn's to make a couple of pillows for the couch. Yay.

Anywayyyyy... I have 800 things to do around the house (of course). I promise to write again soon. I owe you a pot roast recipe!