A few weeks ago, I got it into my head that I had to make an infinity scarf. I went on down to Joann's to procure some knit fabric and got down to it. I looked at a few different blog posts to see how each of those people accomplished the task. I need to be honest: while each of these tutorials was well written, I was SO confused. I don't know why.

I cut the yard of fabric I purchased in half (one tutorial said I only needed half a yard). It became very clear that that was not going to work for me. I sewed the fabric back together. I was not feeling super confident at this point. I sewed down the length of the long side to create the tube. Then, after fighting with the fabric for a while, I properly connected the ends and sewed those together to make the loop. Does any of this make sense? I don't know. I can't explain it. Anywayyyyy, below is a picture of me sewing the long side of the fabric. 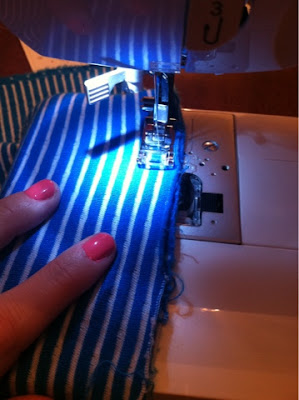 And here I am, wearing the scarf right after I finished it. I know, I know. I look just ravishing. The scarf is super comfy, though. I would probably wear it to sleep if I wasn't worried that it would strangle me in the night. 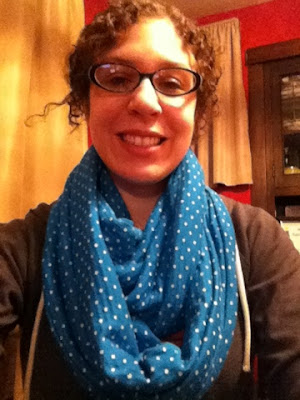 And below is a picture of me wearing the scarf at work. I have gotten some compliments on it, which makes me feel less lame about the frustration that came with the sewing process. 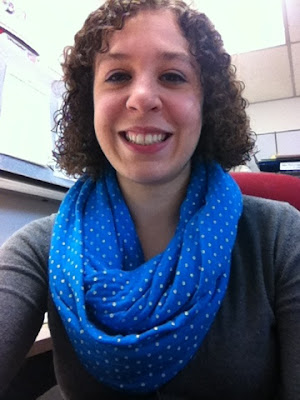 I actually made one of these for Katie for her birthday a couple of weeks ago. It turned out well, and it was much easier the second time. I'm hoping I'm on an upward curve with these because dang. It shouldn't be so hard to make a big circle of fabric, right? Right.
Posted by Erika at 8:18 PM No comments:

Whoa. Hello. It has been far too long since I posted anything. What's the deal with that? I don't know.

Let me get back into the swing of things by telling you about a delicious soup that I made on Sunday. I found the recipe on realsimple.com recently and it sounded delicious. Plus, I hadn't made any chicken soup yet this winter and that is a tragedy. A TRAGEDY.

So when I woke up on Sunday, I threw all of the required ingredients together in the crock. Later on I left to go have lunch with Jamie and the Duck which was a really fun time. The Duck, as always kept me entertained. When I got home, the house smelled so. good. Boyfriend was feeling tortured because he had to be around, smelling this good soup smell, and he couldn't even eat it. Poor guy. 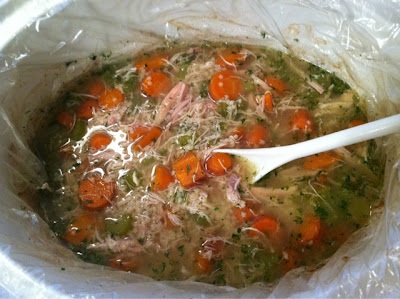 This has been a pretty good weekend.

On Saturday, Boyfriend and I spent the morning running some errands and, in the afternoon, we had a few friends over to watch the Penguins game. I made white chicken chili and vanilla cupcakes (colored pink for Valentine's Day, naturally, with white frosting and red sprinkles). In the evening, Boyfriend and I decided to watch Season of the Witch. You know, because Nic Cage is the finest actor of our time. We knew this would be a classic film experience. We made it only forty minutes before we had to stop. Oh boy. Ohhhh boy. I'm amazed we made it that far. If you watch it, please take special notice of Nic's beautiful fake laughing in a bar scene. GLORIOUS.

Today, I attended a meeting of my Kappa Delta Alumnae Association. We usually meet at a Panera location and today was no different. There were nine of us at the meeting, and I enjoyed it. It's nice to connect with sisters here in the Pittsburgh area. It reminds me of the wonderful times I had at Albion College with my sisters in the Sigma Pi chapter. *sigh* Ah, memories. Here is a picture of me and some of my KD sisters (and closest friends) at Albion's homecoming in 2010: 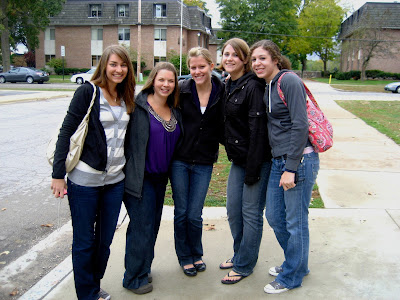 I was fortunate enough to have a phone conversation with one of these fine ladies, Megan, this evening. It was nice to catch up and hear how her wedding plans are coming along.

Here's hoping everyone has a good week! Is anyone doing anything special for Valentine's Day?
Posted by Erika at 10:06 PM No comments:

Okay. It's no secret that I love mail. I love getting letters, I love sending letters. I love sending surprise packages, birthday packages, Christmas packages. You get the idea. Naturally, when I found out that one of my favorite bloggers, Caroline (she blogs over at Sew Caroline), was co-hosting a Valentine's Day themed swap, I jumped at the chance to participate.

I filled out the sign up form and waited really impatiently for the email in which I received my partner's information. Really. Impatiently. And finally, after ages (not really) of waiting, I received the name of my swap partner! It's Mandy! She blogs over at Chocolate and Cream Cake and we have some things in common, so I knew we'd get along just swimmingly. I got my package the other day and it. was. awesome. It was so nice to get something random and special in the mail. If you are curious about what I sent to her, you can read her entry here.

Thanks for everything, Mandy!

I bet you're wondering about all of the cool things I received. Here is my box, as I found it when I first opened the tape: 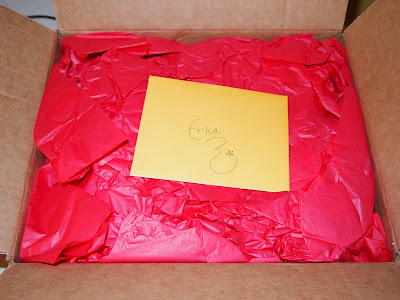 Here is some awesome candy!! I'm so excited to try out these chocolate stirrer things. Don't they look awesome (you can see them on either side of the photo, in case you're confused)?? You just stir it into some warm milk! Amazing. Next up, we have my awesome mug. Since that was the theme of the swap this year, we all exchanged various mugs. Mandy actually painted an E on this one for me! Doesn't it look great?! I wish I were still in school so I could properly rock the pencil holder in public. 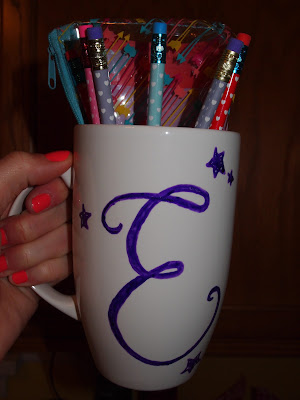 And here is one more shot of everything Mandy sent me: 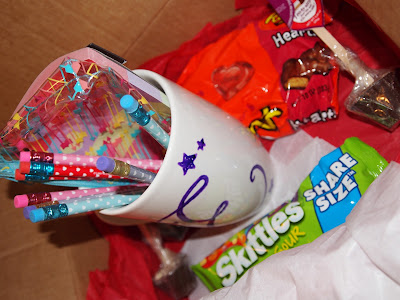 I'm so glad I got to participate in this swap! It was great to make contact with someone out there in this great, wide internet. I'm looking forward to participating in another!
Posted by Erika at 5:32 PM 4 comments:

Ah, the Super Bowl. I didn't know if I would actually be watching this year. You know, because the Steelers weren't playing. And because the Ravens were. THE RAVENS. If you know anything about Pittsburghers, you know that they do not like the Ravens. Anywayyyy... we did watch the game (rooted for the 49ers, I think) and we decided to make some delicious snacks to munch throughout.

I made some pepperoni dip with a recipe courtesy of my coworker, Joy. It's really simple. I have made it twice now and I always halve the recipe because I don't need more than that. Here is the recipe as I make it (if you want to make a larger batch, just double it):

8 oz. block of cream cheese
1 can cream of celery soup
1 lb pepperoni (I used 8 oz. of pepperoni instead)

-Combine in a crock pot.
-Let cook until all hot, melty and delicious.

We tried this on wheat crackers, but it was much better on tortilla chips. Just FYI.

We also made some amazing nachos. Boyfriend found this article last week and asked if we could make them together. I said yes, of course. Who doesn't love nachos?! Toppings-wise, we selected from cheese, chili, salsa and sour cream. Let me tell you. Amazing. It was really fun to make the little nacho cups, too. We had a good time both making and eating these.

Game-wise, I didn't really care that much about what was happening. I did like some of the commercials and I enjoyed the half time show. I think the snacks still get my vote for the best part, though. Mmm snacks.
Posted by Erika at 9:44 PM No comments:

Vegetable beef soup seems like the perfect winter soup, doesn't it? It's hearty and filling and delicious. Last week, I made plans to make some in the crock pot this past Saturday. Of course, I didn't get things started until mid-afternoon. Not surprising. Unfortunately, I had to adapt my plans. The recipe I chose to use came from the aforementioned crock pot cookbook my parents gave me. Here it is:

So... when I realized that there was no way I would have this ready by dinner, I called my mom to ask her how to best switch this to be a stove top situation. She had me brown the stew meat and then simmer it in water (with some bouillon) for almost two hours. I almost burned the meat, but I saved it. After that, I added everything else and simmered that for a while. I decided to add barley (why not?) and added a cup and a half about thirty minutes before dinner was ready. 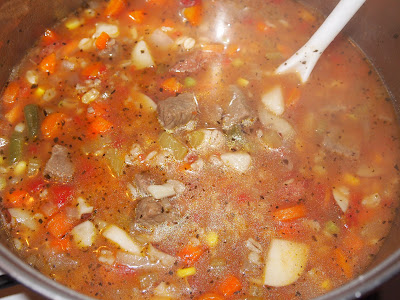 I think that the soup turned out pretty beautifully. Boyfriend liked it, which is always a good thing. The barley sucked up all of the broth after the first time we ate it, so now it is super thick, but I can live with it for leftovers.

If you want some comfort food, you should make this. For. Real. I am usually a stickler for following recipes, so it was concerning when I had to deviate to make this work for the stove. Ack. I'm glad I did, though. *cue triumphant music*